A Business process modeling lifecycle includes the ability to design, model, execute and monitor business processes. "Business" refers to any kind of environment where humans and machines have to coordinate in some kind of goal-oriented workflow.

2.1 Overview of the development process

There is a lot of marketing waffle about how easy it is to implement BPMN models. Certainly, using a PBMN software combo can save a lot of time, but the processseems to be neither straight forward nor simple as of December 2012. There is no simple way from a BPMN model to an executable application.

This step is technically speaking the most difficult and implies configuring / implementing a lot of various types of "parameters" through various interfaces. E.g. create the user interface or specify the integration with other services. This can be done in many different ways and is vendor specific. Often, it requires programming or at least scripting, but in most current modern system, one can get away with forms generators, data definitions and connectors to other services.

Each of these steps require different competences and may be performed by people with very different profiles. E.g. Bonitasoft, in their introductory tutorials, presents a table that distinguishes between the business analyst, the process engineer, the application developer, and the (process) adminstrator and/or end user. In addition, a systems engineer may be needed.

The following figure explains how different Activiti components (a popular BPMN suite) combine to form a complete solution for BPM in the full context of software development. The blue components are part of the Activiti scope. The gray components are out of scope. (Activiti Components, retrieved 14:30, 19 December 2012 (CET))

That kind of picture doesn't really tell what a designer has to do in order to have a working model. It involves a lot of XML parametrization and could even include Java programming. In other words, going from a BPMN drawing to something that is executable is a long route that requires good understanding of data modeling, web services, UI design and so forth.

Most vendors modeling tools include most of the functionality that is needed to create forms and to use connectors. It is not yet clear to us in what ways standards are used, i.e. if exported BPMN 2.0 includes such information at least to some extent...

Let's have a look at the functionality a BPMN design tools may have:

Let's have a look at a few examples:

A typical example of simple modeler (a BPMN-compliant drawing tool) is ARIS Express: 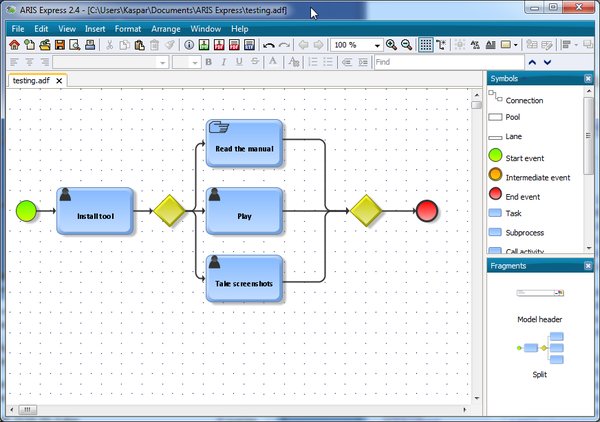 A typical example of a modeler that allows to export a model to a BPMS is the Bizagi Process modeler: 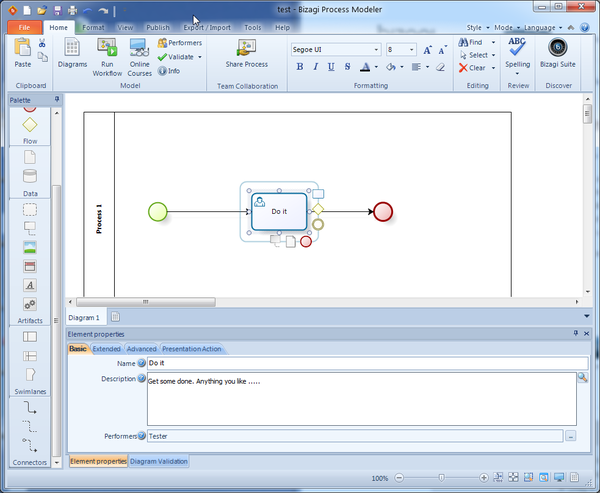 Typically, such tools require the designer to "annotate" various elements of the model and more ... 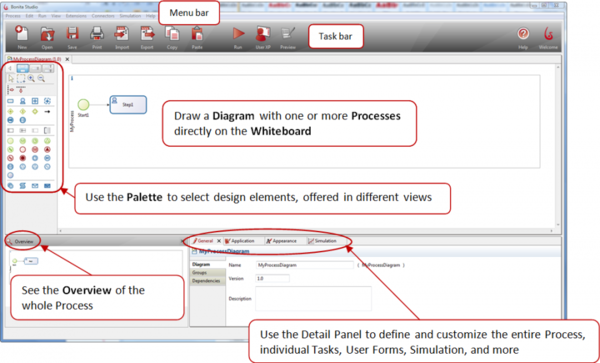 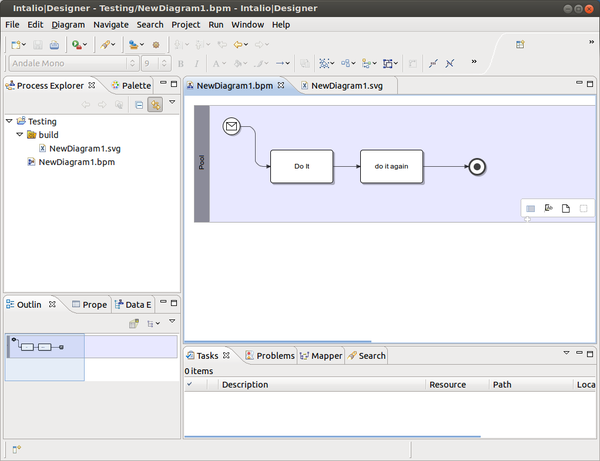 There exist several free tools. The commercial versions of the (commercial) free diagramming tools often include an execution engine. Most often is difficult to find out what version of BPMN is supported (BPMN 1.2 or BPMN 2) and what kinds of standards are used for run-time models. Globally speaking, most vendor documentation lacks a simple technical description explaining how a business process model can be implemented. In promotional videos, the tricky steps (defining data models, user interfaces, connectors, etc.) are barely touched...

This list is by no means complete, see also the links sections below for better resources.

See rather the suites below. Most vendors provide both a modeller and an execution engine plus other middleware.

Such tools usually are plugins for diagramming software

Libraries that can be embedded

Such tools are special-purpose BPMN tools that make more or less sure that a drawing is correct.

(not complete since edutechwiki is not about BPM ...)